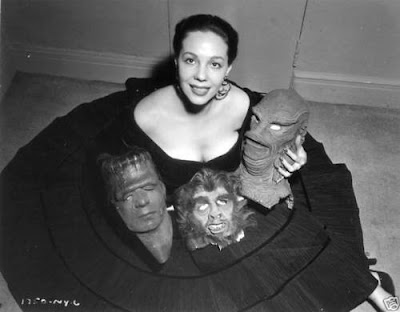 "The designer of the approved Gill-man was Disney animator Milicent Patrick, though her role was deliberately downplayed by makeup artist Bud Westmore, who for half a century would receive sole credit for the creature's conception." - wikipedia

A little known fact about the iconic design of Gill-man was that the artist behind it was an Italian born baroness — the Baronesa di Polombara named Mildred Elizabeth Fulvia di Rossi. She would later change her name to Milicent Patrick which is quite suiting for a woman whose life was incredibly mysterious - case in point, the Screen Actors Guild lists her amongst the missing. After 1980, there are no definitive details about her life, her death, or her whereabouts. Aw, women and their mystique. Let's learn more about this fascinating lady, shall we?*

*I've found different articles with different facts about Milicent's life, if you find contradictory statements blame me, but also blame the enigma that was Milicent Patrick. 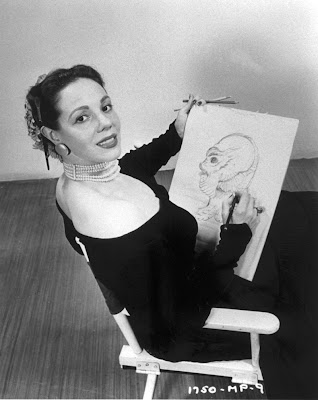 "The Beauty Who Created the Beast." - wikipedia

Milicent was born November 11, 1915 (according to IMDB) another article claims she was born in the 1930s - making her a Scorpio. Her father was Camille Charles Rossi, an architect and engineer. Most famously he oversaw the construction of William Randolph Hearst’s Castle estate in San Simeon, California. Camille's work would have him traveling around the world and Milicent would travel with him. She grew up in San Simeon and in South America. A gifted child, she had ambitions of becoming a concert pianist - yet, when she graduated from high school, at the age of 14 (damn right, gifted child), she studied art with her scholarship at Chouinard Institute in California. 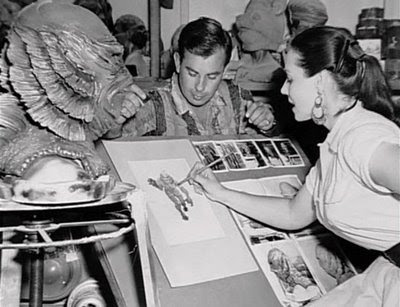 "It would still frighten you, but because how human it was, not the other way around." - William Alland, Producer of CREATURE FROM THE BLACK LAGOON

Milicent was multi-talented. As an actress, she appeared in 21 films over the course of twenty years, including titles like: THE WOMEN OF PATCAIRN ISLAND, RAMAR OF THE JUNGLE, LIMELIGHT, and LUST FOR LIFE - although you will find that almost all of her appearances go uncredited. Much of her work went unaccredited - for two reasons. One, Milicent shied away from the limelight and two, sexism and severe professional jealousy from her boss and Universal make-up department head, George Hamilton “Bud” Westmore, who went to great lengths to take credit for her impressive work as his own.

Apparently, it rubs some people the wrong way to be so talented, but that never stopped her - in her career she also acted in dozens of television shows and worked as a costumer, character designer, and illustrator. Multi-talented indeed. There is a saying that goes 'jack of trades, master of none', however Milicent was probably unaware as she excelled at everything she did and looked absolutely stunning while she did it. 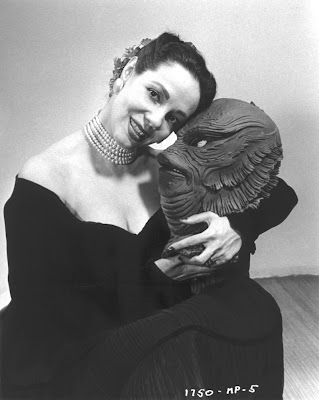 "In any case, it is, uh, interesting to imagine the reactions of the rest of the male artisans in the Universal art department to the presence of the frankly va-va-voom Ms. Patrick in their midst."
-astromonster.com

M-I-C-K-E-Y, Y? Because she was actually one of the first female animators ever hired by the Disney Studios. What? Yup. Fuck yeah, Milicent. In 1954, she would tour to promote the release of the 3D film, THE CREATURE FROM THE BLACK LAGOON. She played a key role in the design of the creature, the Gill-man, whose notoriety would only be rivalled by King Kong and Godzilla. The creature design and 3D cinematography was huge cinematic milestone in the 1950s. This is also where she got the moniker - the beauty that created the beast by Universal. These accolades truly pissed off Westmore despite Milicent's efforts to bring proper dues to the entire team involved in the creation, he vowed never to hire her as an artist again and made good on those threats. 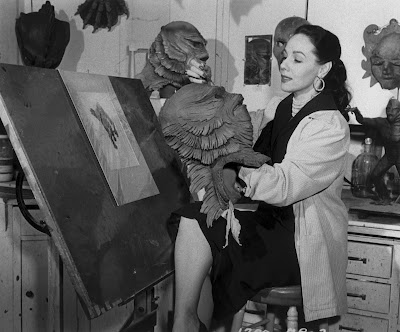 “I don’t think she was ’burned’...that was not her character, and the incident itself wasn’t quite that extreme...She was reaching an age where parts were harder to come by, didn’t want to go back to animation, and didn’t have the connections to make-up and costuming she had earlier in her career. It happens that way."
-Robert Skotak, regarding the impact of her situation with Westmore on her career

Westmore's tirade cut short Milicent's promising career and his efforts muddled much of her contributions then and thereafter, but there are some amazing details and accomplishments that even complete asshole douchebaggery could not bury. Milicent Patrick designed the Xenomorph for IT CAME FROM OUTER SPACE in 1953, the Gill Man for CREATURE FROM THE BLACK LAGOON in 1954, the Metaluna mutant for THIS ISLAND EARTH in 1954, and was a mask maker on ABBOTT AND COSTELLO MEET DR. JEKYLL AND MR. HYDE in 1953 and THE MOLE PEOPLE (self explanatory) in 1956. She was a brilliant artist with an amazing vision and sadly, herself and her work goes greatly unknown.

Milicent Patrick would die February 24, 1998. In her personal life, she and actor, George Tobias, would have an ongoing love affair for over forty years until his death, despite that they never married. She would marry twice in her life, though. Despite the situation between her and Westmore, she never became embittered. She continued to accredit him for the opportunities that she was given and was apologetic that he felt that she had stepped on his toes in any way.

Dignity, always dignity. A true lady and a phenomenal artist and now just a little bit less obscure and unknown after you finish this sentence.