"...just the idea of some woman who seems to be completely insignificant who turns out to be extraordinary" ~ Joss Whedon 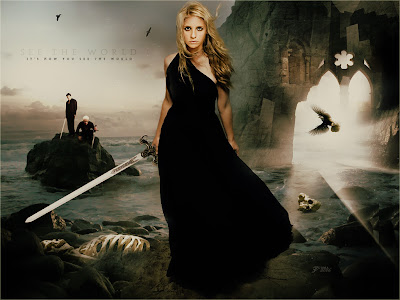 This is the one and only woman in horror that either of us will be writing about who is fictional.

I am not writing about Sarah Michelle Gellar.

This is not a piece on Joss Whedon. Though, I could literally write volumes hailing Joss for his support and empowering of women by writing them roles that smash previous female stereo types. Perhaps, after Women In Horror month, I shall.

I had to give this one a real hard think. There are so many women that are worthy of being written about in celebration of WiH month and with only 28 days to cover them. I couldn't possibly hope to recognize them all. However, I couldn't deny that Joss Whedon's character, Buffy Summers, had not only a huge affect on me, but has inspired countless others. She is strong and confident and empowered, but she is also human and that makes her vulnerable. It is with great pleasure that I write about the only fictitious woman to make our list who's touched so many lives that she has really taken on a life of her own... 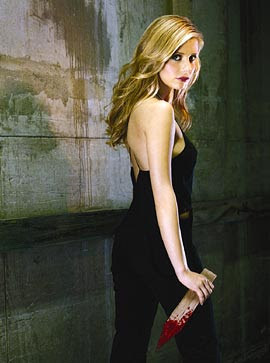 You may have see the movie, you've probably seen the show. While the series was running it brought in a not-too-shabby 4 to 6 million viewers an episode. The film, though cute with moments of gothic comedic cool was far from what this character was meant to be. 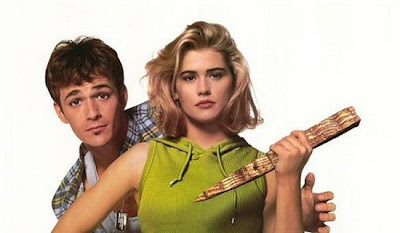 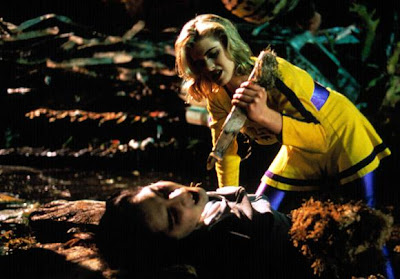 "I had written this scary film about an empowered woman, and they turned it into a broad comedy. It was crushing." ~ Joss Whedon

I was a year behind Buffy Summers in high school. If we had both attended Sunnydale High, she'd be one of the cool older kids. I wasn't hooked from the very beginning. I had heard about Buffy and was told it was this great show and Sylvie and I would totally love it, but I was in high school so obviously I knew better than everyone else. One fateful night I was channel surfing and encountering a group of truly terrifying creatures. They silently moved throughout a sleeping town without walking. Rather they sort of hovered over the ground. They were expertly dressed and had these strange frantic little hunched minions that had freed their arms from the straight jackets they wore. All the while, their expressions never changed. They wore painted on grins with some of the greatest prosthetic effects I had ever seen. 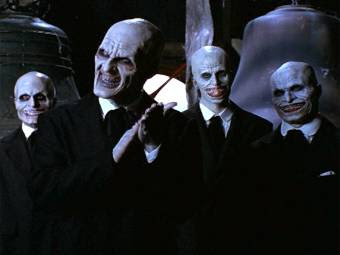 Of course, I am speaking about the famous, Emmy award nominated episode, HUSH, and the creatures are none other than the Gentlemen. This episode features 25 solid minutes where no dialogue is spoken. It was incredibly ballsy. Many consider this the greatest episode of the series. Perhaps it was fate or divine intervention that brought us together. I remember watching the whole thing, just blown away. By the end of it, I turned to Sylv and said, "THAT'S Buffy? I gotta watch this."

Buffy was Joss' answer to the Hollywood female stereotype of "the little blonde girl who goes into a dark alley and gets killed in every horror movie." Buffy became what monsters and beasties would run and hide from. When they went to bed, they'd check under the bed and inside the closet to make damn sure she wasn't hiding in waiting.

From there on, I went back and started to re-watch episodes. Many, late night on our "Space Channel". The more I saw, the more I felt for this character. Buffy, yes, would fight against vampires, werewolves, demons, and all sorts of nasty creatures that go bump in the night, but it was never a show about monsters. This is what the movie didn't understand. Do we love Spider-man because he kicks ass? In part, absolutely. But it's the man behind the mask that moves us. It's his humanity. His vulnerability. He feels things we feel. And that's what kept people, myself included, watching. Maybe the monsters got people interested enough to take a look, but it's the story of a girl who faced all the challenges of a teen in high school and a young woman taking on more responsibility as she grew older that captivated audiences.

"In the world of Buffy the problems that teenagers face become literal monsters. A mother can take over her daughter's life ("Witch"); a strict stepfather-to-be really is a heartless machine ("Ted"); a young lesbian fears that her nature is demonic ("Goodbye Iowa" and "Family"); a girl who has sex with even the nicest-seeming guy may discover that he afterwards becomes a monster ("Innocence")" ~ Academics Wilcox and Lavery 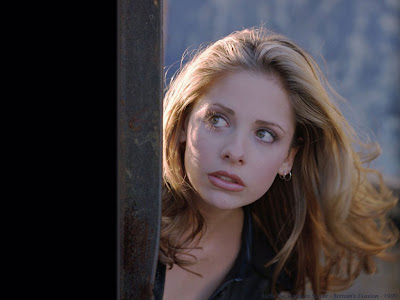 Buffy faced the same problems we all do. She had to make hard decisions. The series beautifully displayed how making the right choice is rarely the easy or popular path to take. Sometimes it sucks. Sometimes even if you try your hardest and do your best all the time, it might feel like it's never good enough. You feel alone. You feel like shit. You wonder, "why do I even bother?" 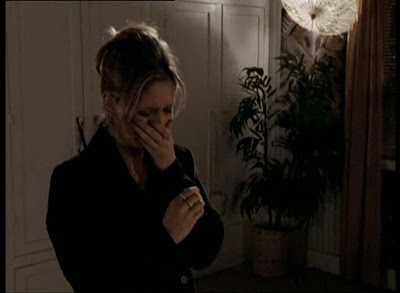 But the most important sign of a hero is not how many times you get knocked down, it's how you get back up. No matter what life threw at Buffy, she never stopped. She never gave up. In even the bleakest of situations, she would never quit. Sure, at times, she'd feel overwhelmed and had to take some time to figure out how to keep going. In the series, she died twice, had to raise her younger sister, saved the world countless times, killed the man she loved, cared for her sick mother and ultimately came home one day to discover her dead, had been at one time or another abandoned by everyone she trusted, gave her life to save her sister, been fired, been expelled, been arrested, been beaten, stabbed, and shot, and still she found some way to take the high road. 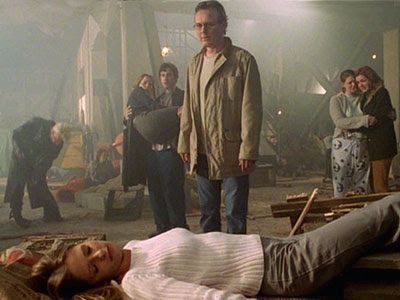 There was a time that I would describe how I was feeling via Buffy episode titles. Each episode had a feeling and a theme to them and they would always come together at the end of the season. I would say, "oh, I'm The Freshman today" or "I'm so Life Serial". For whatever sadness or challenge life would throw at me, I would find a Buffy episode that made me feel better.

Some episodes that were just incredible... The Body. As I was mentioning, after a period of Buffy's mom being ill, Buffy one day came home to discover her mom had died. It was an amazingly thoughtful episode. The use of sound and silence was masterful. Through the episode, you were placed in Buffy's place as she struggled with thoughts of having failed her mother. She had to pick up her sister from school and tell her that their mom had died. 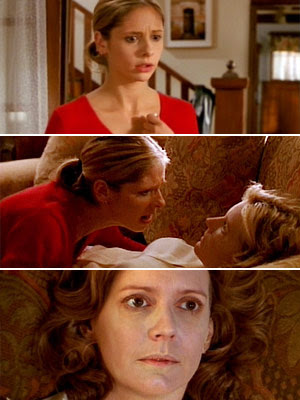 A girl, "the Slayer", with so much strength and power, found herself as helpless as we all feel in the face of death and loss. We think, "if only I had done this" or "if I had done that", they'd still be here or things might have turned out differently. The episode wasn't flashy. There was still a vampire in it, but it put the focus on human emotion and how each individual dealt with something that we all have to face at some point in our lives. It paid the proper respect to death and loss and I admired that. 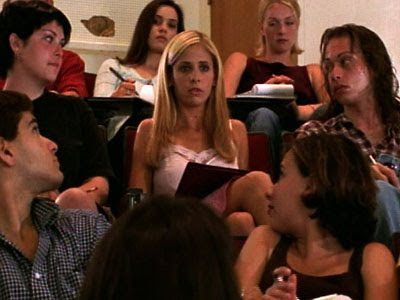 Another favorite is the Freshman. It's episode one of season four. In the episode, Buffy has just graduated highschool and is attending her first day of college after the summer. Everything has changed. Her friends have adjusted or left. Her mentor, Giles, is not there for her. Her mother has used her old room as storage. And a vampire kicks her ass and Buffy just runs away for the first time in her life. 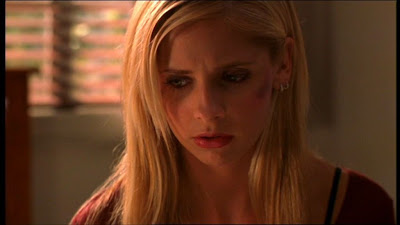 In all ways, Buffy feels out of place and not like herself. The past is glorified and the present is a whole lot of suck. The future isn't shaping up to be much better. However, after an encounter with her friend, Xander, she begins to call off the pity party and finds herself again. She kicks some ass and feels like her old self again, her friends even show up to help out... even though it's after the evil has been put down. 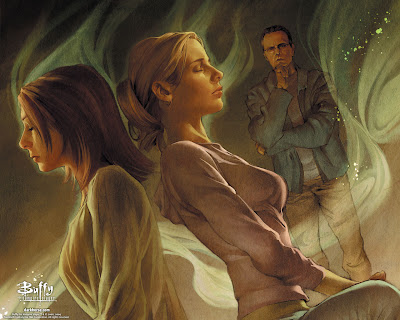 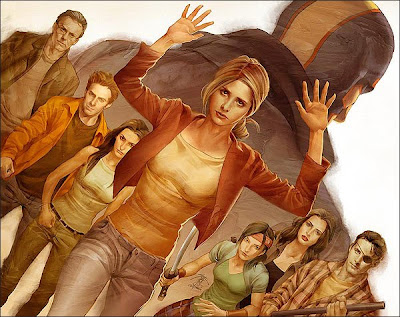 Literally, I could never shut up about Buffy. At many times in my life, when I've felt lost, I have actually asked myself, "What would Buffy do?" Usually, I'd throw in a season and take a trip down memory lane. Buffy has become such an entity that even when the show ended, her story continued on. She lives in comics and an upcoming online series. Fans continue to write fan fiction and she's slated to come back to the big screen, regrettably this time without Joss. 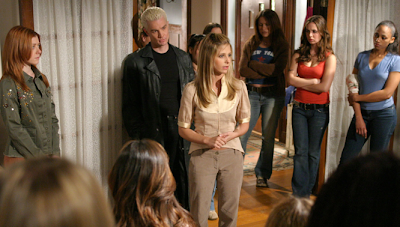 Sometimes it is truly shitty to try to be the good guy. Much of the time, even when you are the good guy, you end up being the bad guy. It isn't easy, but honestly, what in this life is? I love Buffy. She makes me feel, even though I'm little, I can do big things. That "I wanna be her" aspect is in full force in her. I'm so grateful for Joss writing not only a plethora of incredible, interesting, strong women, but especially for writing a hero that not only can stand fearless in the face of true evil, but all that crap that life throws at you. She reminds me that we all have that strength and good in us. Even at our lowest moments.

So, my friends, what Buffy episode are you?