"In Hollywood, if you are a man and speak your mind openly, you're considered a man in full. But, if you are a woman and do the same, you're nothing but an annoying bitch." ~Sigourney Weaver 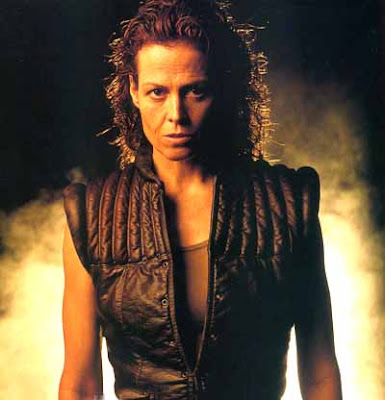 Say her name out loud.

The name alone commands respect and awe. We cannot talk about strong women represented in horror without mentioning the queen. The woman is a powerhouse. Her now legendary character, the heroine of the ALIEN films, Ellen Ripley, was meant to be played by a male. However, casting a woman as the hero was heralded as a seminal role for challenging gender stereotypes and has lead the way for many heroines to follow in her footsteps. She didn't just open the door for women, she kicked it off the fucking hinges.

Looking at her it's hard to imagine that she was considered a nerd in school and often tormented for her height. At 14, she towered over her classmates standing 5'10 1/2". A real life Amazon by her own right, she is known to be incredibly modest, instantly putting those lucky enough to be in her company at ease. Sigourney is also very grateful to her fans. 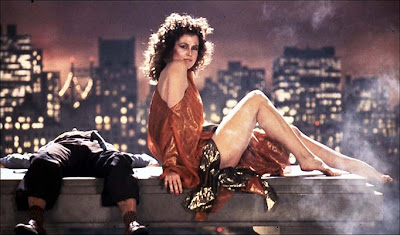 She has played numerous epic characters that have a lot of the same qualities you'd find in her... complexity, strength, beauty, brilliance, and timelessness. She has kept herself in peek physical condition throughout her life and maintains a physique that would put many a man to shame even to this day. Oh, and she's 61.

She made her film debut in Woody Allen's ANNIE HALL in 1977, a brief cameo role for which she was paid a mere $50, and followed up with the film that would set her in film infamy for all time, Ridley Scott's ALIEN. Her portrayal of Ripley has landed the character on countless TOP HEROES OF ALL TIME lists and was hailed with an Academy Award Nomination for Best Actress.

Along with Sissy Spacek, Piper Laurie, Janet Leigh, Jodie Foster, Glenn Close, Kathy Bates, Eileen Heckart, Ruth Gordon, Patty McCormack, Nancy Kelly, Toni Collette, Ellen Burstyn and Linda Blair, she is one of the few actresses to have been nominated for an Oscar for a performance in a horror movie.

Though she has been nominated for an Emmy, a Grammy, an Oscar, and a Tony Award, Sigourney is the only person in history to have been nominated for each, but never won one. However, the coolest people on Earth did recognize this Goddess amongst us. She was awarded the Heroine Award at the 2010 Scream Awards for her priceless contributions in science fiction, horror and fantasy films. 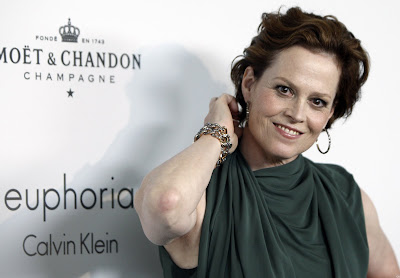 And the woman isn't "just an actress". Even as far as acting is concerned she has forever changed how we see women in films. She is a wife, a mother, and an activist. She is an outspoken environmentalist and often involves herself in charity work. After making Gorillas in the Mist: The Story of Dian Fossey, she became a supporter of The Dian Fossey Gorilla Fund. She is now the DFGFI's honorary chairperson. 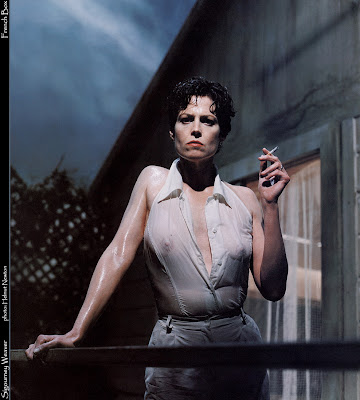 I was lucky enough to have been a little girl during the 80s and had ALIEN to watch growing up. I remember watching Ripley on the TV in my parents room and being afraid for her and her cat in her legendary scene seen above. I remember my mom telling me that it was okay, Ripley always wins. And she even saves the cat. I looked at the unbeatable super hero on the screen and thought, "she's so strong. I want to be like her when I grow up." If it wasn't for her, I certainly don't think I'd be where I am today. In fact, I shudder to think what kind of roles women would be playing now if Sigourney Weaver had never played Ripley. That's just not a world I'd want to be a part of.

I hope that one day I am able to work with this legendary icon. This is really one of the many things I love about Women In Horror month. I get to look back at some of the amazing women like Sigourney Weaver that made us little girls all say, "I wanna be her."