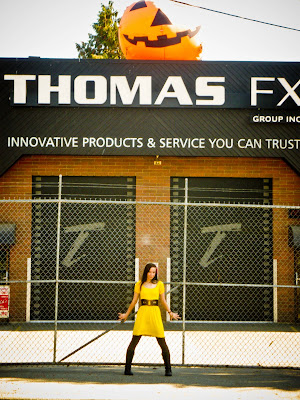 Behind me, THOMAS FX stands a proud and epic structure.

If you are a Vancouver~ite and have found yourself inside, you were undoubtedly treated to being in the company of some of the finest expendable supplies, pyrotechnics, artificial snow effects, custom breakaway glass, and mechanical effects rental equipment that you could have ever dreamed of. During their Christmas season they transform their space into a winter wonderland that makes even the most adamant of Scrooges overcome with child like wonderment. If you prefer to tread on the dark side like yours truly, you'll have to drop by Halloween time for a display that will make you feel like you just wandered into a Tim Burton film. 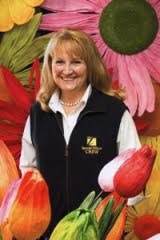 However, you may not instantly recognize the woman above and you very much should. Betty Thomas is a living legend in the film industry. Whether you realize it or not, you know her work.

In addition to helping to establish the Thomas name as the premiere special effects company in Canada and supporting dramatic effects for successful film projects around the world, she was the first female stunt performer, first female stunt coordinator, and first female 2nd unit director in Canada. She even trained the incredible Melissa Stubbs. She's worked on countess films with some of the biggest directors and actors in the world. Her credits include well over 50 films.

Betty has been recognized nationally by her peers as "Canadian Woman Entrepreneur of the Year" for her contribution to the local economy, and received the international "Ambassador's Award" from Canada's Ambassador to the United States, in Washington DC.

Betty also received the "Award of Merit" from the British Columbia Film Commission for her "Contribution to the Development of the BC Film Industry", and several awards from the North Vancouver Chamber of Commerce for "Business Excellence"... for "Innovation", and for "Best Business".

Betty is a member of the International Women's Business Forum, an Honorary Lifetime Member of Canadian Women in Film & Video, and a long standing judge for the annual Canadian Woman Entrepreneur of the Year Awards.

And yet I had to struggle to even find a photo of her.

I hate to think that many of you are hearing her name for the first time, but I am honored to be able to showcase the woman whose invaluable contributions to the film industry has paved the way for countless others. She is a truly remarkable human being who can teach us all a lot about business, perseverance, and strength.

Thank you, Betty, most humbly, for being an inspirational pioneer in the film world and making us all work a little harder in hopes of coming anywhere close to the bar you've set so very high.